The idea came like a bolt from the blue in the middle of the night.

A passion for safety gave Danish engineer Flemming Selmer Nielsen – or “Mr. Bolt” as he is affectionately known – a 1.30 a.m. Eureka moment with an idea for a bolt-tensioning inspection tool for wind turbines. That early morning revelation was four years ago, and last year the idea was granted a patent.

Incorrect bolt tension can lead to the failure of the entire wind turbine, as Selmer Nielsen knows only too well. In his former job as the bolt expert at a major wind turbine manufacturer, he has seen it all, including one collapse. It had always bothered him that no simple and effective measuring instrument existed to measure the safety-critical tension in the bolts.

When he started to work for R&D Test Systems, a Danish wind turbine tools expert, Flemming Selmer Nielsen, focused his creative energies on solving the problem of accurately measuring tension in bolts. Incorrect bolt tension in wind turbines is a common complication that can result in expensive call-out charges and downtime and can, at worst, fail the entire turbine. Incorrect tension can be caused by the relatively low accuracy achievable using conventional tools or through manual errors.

After working on the solution for more than a year, the idea came to Flemming Selmer Nielsen like a bolt from the blue.

“I woke up at 1.30 a.m.,” explains Flemming Selmer Nielsen. “I still remember the exact time vividly; I was physically wide awake with the clear idea of the invention and exact equation of how to determine the accurate tension of a bolt in the wind turbine. That idea from four years ago is the principle of the Bolt-Check tool our customers use today.

“I was unable to sleep for the rest of the night: first as I was so excited I had cracked it; and second because the revelation I had included the essential mathematical equation that forms the basis of the patent. By 7.00 a.m., when my wife appeared, not understanding the enormous moment that had just happened, I had just finished writing it all out on paper,” comments Flemming Selmer Nielsen.

“The solution that came to me that night lay in combining ultrasonic and physical measurements of the bolt, where the tension in the bolt can be determined by knowing only the difference between these two measurements,” adds Flemming Selmer Nielsen. “This had not been done before.”

“Using a torque wrench or a tension tool to tighten a bolt provides indirect measurements of the clamping force,” he explains. “Our system directly measures the elongation of the bolts that occur when a bolt is under tension, and that is a significant difference,” adds Flemming Selmer Nielsen.

The direct measurement provided by Bolt-Check achieves much greater accuracy than, for example, a torque wrench.

“This means that we can afford to tighten the bolts somewhat harder than is otherwise possible. This may mean that we only need a single retightening of the bolts. We can cut the maintenance time in half,” says Flemming Selmer Nielsen.

“In my experience, engineers are often called to perform root-cause analysis as a result of loose or broken bolts, and in many cases, it is because the clamping load obtained by applied torque is insufficient,” comments Flemming Selmer Nielsen. “Bolt-Check shows that this is a relatively simple problem to solve. Having had to assess one wind turbine collapse where incorrect bolt tension was one of the problems, I’m confident that Bolt-Check can contribute to safety in the future, especially as wind power stations age and need more maintenance,” he concludes.

The engineers benefit too

Another benefit of Bolt-Check is improved health and safety for the engineers carrying out this vital work. Traditional tools can be heavy and can also be a safety hazard as they operate at high hydraulic pressure. Capable of checking more than 100 bolts per hour, the Bolt-Check tool is light and hand-held and thus offers significant health and safety improvements.

The Bolt-Check tool does not require specially manufactured bolts but can be used with any bolt. This is one of the reasons that the system costs a fraction of the price of some other sensor-based systems. However, a unique traceability-tag can be easily added to each bolt monitored, providing a detailed documentation trail that includes the location of each bolt, as well as its service and maintenance schedule.

The Bolt-Check tool was developed at R&D Test Systems’ headquarters at Aarhus, in Denmark, which was also the first country in the world to invent a three-blade wind turbine, which started operation in 1957.

Bolt-Check won an innovation award in 2019 at the Wind Energy Denmark 2019 exhibition and has obtained DNV-GL product certification allowing the equipment to be used for service and maintenance inspections as an alternative to torque or tension tools. The system is currently in operation in both offshore and onshore plants. 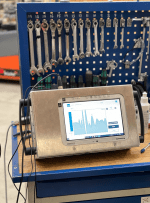 Which of the many ways to tension wind turbine bolts in service is most accurate, quickest and cost-efficient? 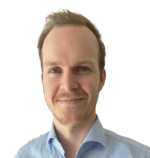