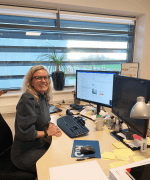 At R&D, Marianne has been on various leadership courses, which have further contributed to her professional development.

Marianne works as an HR Business Partner in our Shared Services department at the head office in Hinnerup and has been at R&D since June 2016. Ordinarily, Marianne and much of her time is spent on recruitment, coaching, employee development and strategic tasks. She is therefore works with all employees, and her role at R&D also involves much sparring with Axel, R&D's CEO, about various organisational and strategic tasks.

What is Marianne's background?

Marianne was originally trained as a graphic designer from Aarhus Tech and has worked in the field of graphic design for many years, including at an advertising agency and a book printing company. But how did she end up here? It has something to do with her drive and quest for self-development. In fact, Marianne herself will say that she has not finished her education at all, as she has continuously furthered her education in what she is passionate about; management. For example, during her time at eBay as a Production Manager, she took various management training, such as situations specific management and strategic management. She, too, at R&D has been on various leadership courses, which have further contributed to her professional development. Her passion for working with people and her interest in management made her quickly realise that she wanted to work in HR. Although the leadership role and working with people fall Marianne quite naturally, she remembers one situation where she has felt particularly challenged; "I think it was really challenging the first time a trainer filmed me on a leadership course. It was awful to see yourself and then receive feedback. It reminded me of the old days when you heard yourself on cassette tapes".

Marianne lives in Hinnerup with her family, and when she is not at work at R&D, she spends much time working out. In addition to her own training 3-4 times a week, she teaches various classes in the gym. Therefore, it is not only at work that she is responsible for a team, but also in her spare time, she tries to help and develop other people.

At R&D, there is minimal bureaucracy which means that there is not far from level to level

As said before, Marianne spends a large part of her time recruiting new employees. It is a long process of screening the applicants, call meetings and holding interviews and everything else that comes with a recruitment process. "If you look at it in the light of the growth we have had, and how many we have brought on board, it is self-evident in the numbers that much of my working time is spent finding the right candidates," says Marianne. When Marianne joined R&D 4.5 years ago, it was primarily to solve various administrative tasks, but as the development took off, Marianne was given the opportunity to build up our current HR department. Previously, HR work was associated with only soft tasks, but here at R&D, it has been given a significant role in connection with our development. As Marianne herself emphasises, "There is a lot more in it than just the soft values. And if I have to say something about myself, I have an extremely good balance between the soft and the hardcore business". Marianne understands how to run a business. This is also why our HR department today works so well and that it is a well-integrated part of the company.

"The most exciting thing about working at R&D is the variety we have. There are lots of different types of tasks and new things to respond to," says Marianne. She also says that we, at R&D, are good at making decisions and run with them. To this, she adds, "Efficiency. It just makes the everyday life a little bit more fun. We talk things through, but not to unconsciousness". And even after the integration to American MTS, we can handle ourselves. If we communicate and can argue for our decisions, we have freedom of action.

How is the work environment?

"In general, there is a lot of freedom, as we trust our employees. You do not interfere with each other's things, " says Marianne. At R&D, we back each other up if someone meets challenges and needs help. Just as professional as we can be for business meetings with customers, just as informal the tone is among the colleagues. Marianne takes great pride in our flat organisational structure, which enables everyone to have speaking time. In addition, Marianne also says, "At R&D, there is minimal bureaucracy which means that there is not far from level to level". And as a former employee of eBay, a large international company, Marianne cannot avoid noticing clear differences in the work culture and tells; "At R&D, there is no blame culture. We can all make mistakes, and no one looks badly at you for that reason. This actually just makes you dare a little more".