The wind industry is characterized by short development cycles and ever-increasing rotor diameters of wind turbines. The increasing size and complexity of the wind turbine blades demand that test systems also undergo continuous development to accommodate increasing requirements of the industry.

As a part of the EUDP supported project “BLATIGUE,” R&D Test Systems  has the last few years worked on the development of the new electric Dual Axis Exciter, which is a novel development from the electric single-axis ground-based Flap Exciter.

The Dual Axis Exciter is a full-scale multi-axis fatigue blade test system that can simultaneously apply flapwise and edgewise loads. This setup ensures not only that the test system applies test loads equivalent to the loads experienced under operation on the turbine but also reduces the overall duration for testing of the blades. The exciter is powered by two independently controlled electric motors that simultaneously can apply combined flapwise and edgewise forces to the blade. Blaest’s exciter applies up to 165-190 kN to the blade in the flap direction and 95 kN in the edge direction while supplying around 275 kW of excitation power to the blade.

“The dual-axis exciter shows good performance, and the excitation method provides many opportunities, still being user-friendly. Being able to shorten the test time will be a significant improvement for our customers, and in addition dual axis load introduction can represent the complex blade loading from the field,” explains Søren Kjær Nielsen, Chief Engineer at Blaest.

The dual-axis exciter shows good performance, and the excitation method provides many opportunities, still being user-friendly. Being able to shorten the test time will be a significant improvement for our customers

The wind turbine manufacturers must test their blades according to specific standards. Some of the required tests are flap and edge fatigue tests, which – until now – would be done with two different test systems. With the new Dual Axis Exciter, the OEM’s can test their blades using only one test system, saving changeover time when shifting between the tests.

This is a big efficiency improvement as the test time is reduced while reducing the risk of damages to the blade due to changeover operations and handling. Furthermore, the Dual Axis Exciter enables multi-axial fatigue test loading that better represents the loads seen by the blades in operation on the wind turbine. The new tests facilitate more precise tests and data, which results in better verification and thereby reduced uncertainty.

The project has been supported by one of the world’s leading offshore wind park owners Ørsted, a member of the project’s Steering Group. Ørsted is also excited about the new possibilities for future blade testing with the new test equipment. 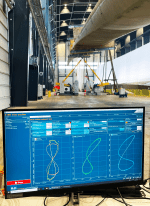 Later this year, R&D Test Systems will deliver an even bigger Dual Axis Exciter to an American customer, which will be 208-240kN and weigh up to 40 tons. 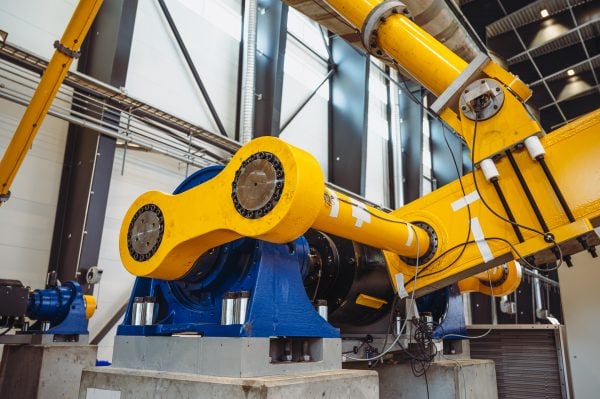 "Developing good test equipment for dual-axis fatigue testing of wind turbines is difficult because the industry still hasn’t really aligned clearly on the relevant test methodologies and accompanying requirements. In that way, it is a bit of a chicken-or-the-egg question – should we develop new methods for dual-axis fatigue testing of blades without knowing if what we are aiming at is practically possible, or would we try to do some actual testing without knowing how optimal the test really is?
In the Blatigue project, we have tried to overcome this challenge by bringing relevant partners together and working jointly on a good solution.

The result, in terms of the developed and manufactured dual-axis exciter, which is now part of our fleet of test equipment, is a mature and robust machine which is practical to use, and to the best of our knowledge is capable of almost anything which we consider relevant for the scope of performing dual-axis fatigue testing of wind turbine blades of this size," explains Jesper Kann, Technical Manager at Blaest.